Richard: Kirby’s Epic Yarn was one of the best-looking games on the Wii and now the team is giving that handcrafted touch to Yoshi with Yoshi’s Woolly World. The game looks like I can reach into the screen and grab a Yarn Yoshi. One of my biggest concerns: is that yarn style mostly aesthetic? Looking at the trailer, where are all the Yarn inspired mechanics?

Marcus: How many enemies have we seen Yoshi bing with his yarn egg?

Richard: I’m pretty sure I saw Yoshi hit some Shy Guys in a previous video (see here), but there aren’t any examples in the E3 2015 trailer. The best example may be when Yoshi nails a Piranha Plant enemy, which wrapped its mouth in yarn. That’s a pretty good example of a yarn- inspired mechanic. I’m looking for verbs like unravel, wrap, tangle, and I’m looking for the mechanics inspired by these verbs to be dynamic rather than a visual effect. For example, if you unravel a yarn boss halfway versus 3/4th of the way, does it move slower because it has more yarn mass?

Marcus: That sounds like one of those Miyamoto questions when he asked “what raw materials the propeller was made of ?”. I might ask you if something light as a feather gets lighter can it move faster? To me yarn and wool are materials that no matter how much I hold it’s always light as a feather. And so putting on my Miyamoto hat, I’d say that mass/weight wouldn’t be a factor in the mechanics of Woolly World.

Richard: But what about the Woolly World level from Super Smash Brothers for Nintendo Wii U? It has platforms suspended by wires that move under the weight of the fighters. Where do you think Sakurai and the team got that idea from? 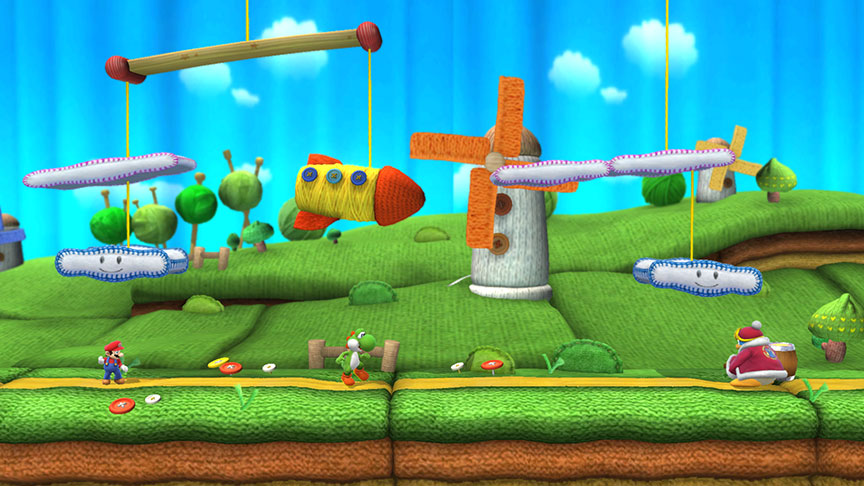 Marcus: Sakurai’s level in Smash Brothers almost feels like an extension of the original “Smash Brothers motif”: a child’s toy come to life. Woolly World in Smash is a Yoshi level come to life in a more literal sense. It’s a diorama version of Woolly World. And when things are suspended by strings it’s only natural that weight and physics apply.

Richard: I had to go back to this video from E3 2014 to find examples of Yoshi actually throwing yarn balls around. Turns out, throwing a Yoshi ball is more powerful than a small yarn ball. And throwing a large yarn ball can do multiple jobs like stringing up platforms as it ricochets around. Stamina in this case is like yarn HP or strength. The more stamina a ball has, the more powerful the impact when thrown or the more tasks it can do.

Marcus: That’s an interesting way to convey weight. A larger ball having more stamina sounds like a layman’s definition of inertia. The larger ball takes more energy to bring it to a stop.