In the last article in this series I talked about experience points and character levels. Now we dive into the other half of the character advancement systems of Final Fantasy Tactics: Job Points and Job Levels.

Job Points, henceforward JP, are gained when XP is gained. There’s a separate pool of JP for each Job. The character adds to this pool when it gains JP as that Job. The player can spend JP from a Job’s pool to unlock abilities associated with that Job.

The formula for Job Points gained from a successful action is 8 + (Job Level * 2) + [Level / 4]. (Level / 4 is in square brackets because the result is truncated to its integer component, e.g. [6 / 4] = 1.) All characters on the battlefield with a Job unlocked earn ¼ of the JP earned by any other allied character in that Job during the fight.

At level 1, a character starts with access to only two jobs: Squire and Chemist. To be able to use other Jobs, the character needs to gain Job Levels in the jobs they have access to by accumulating JP. Job Levels are based on total JP gained, not JP available to spend.

The table below gives an idea of how quickly job points are gained if the player is fighting opponents at their level and focuses on leveling one job.

Job Levels unlock more advanced Jobs (at which point the player can put that character into that Job and start gaining JP for it) and quicken the pace of JP gain. There’s a relatively complex web of Job Levels required to unlock the most advanced Jobs, as you can see in the image below.

(From The Final Fantasy Wiki)

The player spends Job Points to unlock abilities. Most abilities cost between 100 and 400 JP, with others costing as little as 25 or as much at 1,000. In a typical battle a character will earn somewhere between 100 and 250 JP, which means that they’ll usually be able to unlock some ability each battle in the early stages of leveling up a Job. Later on it’ll be a few battles between ability unlocks. 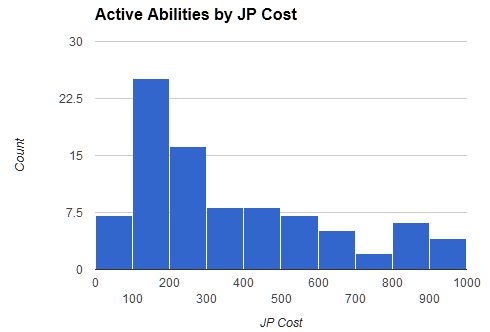 An interesting twist is that sometimes the player doesn’t need to pay JP to unlock abilities–there’s another way to acquire abilities! If any character is not resurrected within three turns of its death, it is replaced with a treasure box or a crystal. When a character moves on to a crystal, the player (or AI) gets the choice of regaining some HP and MP, or “inheriting” some randomly-picked abilities from the crystallized character. Inheriting abilities only works if the character picking up the crystal has unlocked the job associated with the skills in the crystal.

(My Knight saves over 1,000 JP by inheriting a defeated Knight’s crystal.)

Though the Job system gives the player a lot of interesting options for building an efficient party that can annihilate enemies in any number of creative ways, the way that JP feeds into party-building as a reward system doesn’t work as well as it could. My primary complaint about the tuning of JP is that the player can easily go a battle or two without unlocking any interesting new abilities. One of the most fun things in my experience with the game is when I unlock and start using that awesome new ability I’d been planning to get and building towards. With somewhat variable and sometimes slow ability unlock pacing, that cycle of setting my eyes on a new ability I want and then actually being able to use it in combat can be unpleasantly stifled. At the other extreme, when the player can get crystals of the Jobs that they want, it can lead to a landslide of progression. This kind of uneven reward pacing may keep the player marginally more engaged than a steady drip, but the lulls are made worse in my experience by those times when it seems I’m unlocking far more abilities than I will want to use.

Now that we covered the systems behind character progression, we have sufficient knowledge to make a broader critique of the dynamics that emerge. Next in this series, I’ll be examining an aspect of playing Final Fantasy Tactics that prevents me from falling in love with the gameplay, and, I argue, prevents the gameplay from reaching its full potential: grinding.