It’s time for the judge to be judged. We’ve nearly come to the end of our Vlambeer Scale article series. So far we’ve used the Vlambeer Scale of Quality to measure the Vlambeerian game feel of Ridiculous Fishing, Ninja Fishing, and an upcoming indie game called Downwell. Now the question is how do Vlambeer’s games measure up?

The following is a list of Vlambeer’s games in chronological order and some of the points from the Vlambeer Scale of Quality that each game does not have.

Muzzle Flash, Impact Effects, Enemy Knockback, No level of permanence, Lerp (no camera manipulation at all), Sleep (only for katana), Strafing

Hit Animation, Player Knockback (guy is in a boat), Strafing 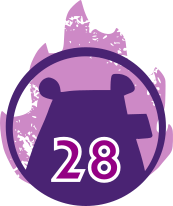 Richard says: back in 2010, I wrote a blog post on Super Crate Box on Critical-Gaming. Here are three points I made. Key words are bolded and Vlambeer terms are added in brackets where appropriate:

Looks like the game feel of Super Crate Box is an important part of the experience and an important talking point. After all, I wrote this 5 years before we started the Vlambeer Scale of Quality here at Design Oriented.