Have you ever been afraid taking a closer look at a favorite and classic game might reveal that it isn’t as good as you remember? Have you wondered if your memories of a game are just a phantom, a collection of scattered thoughts you follow in an endless loop? Have you chased feelings of nostalgia trying to relive what once was? If so, then you probably can relate to the Ghosts in Pac-Man. For well-designed games, what makes them good back in the day is the same thing that makes them good today. Pac-Man’s fame is still recognized because of its polished, well-tuned gameplay. What makes Pac-Man great can be summed up like this:

Pac-Man is an action game that challenges players to move through a maze. The goal is to navigate through the twists and turns of the maze to consume each dot and Power Pellet. How you navigate is up to you: there are hundreds of ways to beat each maze. And where you need to go is easy to determine: Simply follow the trail. Playing Pac-Man would be a trivial challenge if it weren’t for the Ghosts. Avoiding, kiting, and turning the tables on the enemy Ghosts adds complexity and depth to the gameplay. The threat of running into a Ghost makes a simple pathing decision into a much more complicated one. Where you go, when you go, and why depends on the where the Ghosts are, how they’re moving, and how close Pac-Man is to Power Pellet.

A key factor in what makes Pac-Man so fun is clear feedback. With all the level and enemy elements clearly visible at a glance, the player has all the information needed to make well-informed decisions. Though Pac-Man only features a MOVE mechanic, players constantly make decisions about where and when to move by leveraging this clear feedback. Especially when players are under pressure because of the speed at which events unfold, having such good feedback keeps the Ghosts movement from feeling like frustrating ambushes from out of nowhere.

Perhaps the depth of Pac-Man gameplay can best be understood by considering how each aspect of the enemy Ghost elements makes the goal of eating all the dots and Power Pellet in the maze more difficult. Without Ghosts, the goal is easily obtained. Throw one Ghost in the maze, and crossing its path is generally the only thing a player would have to worry about. In fact, if the Ghost is constantly chasing the player, it stops becoming a threat as it will not be able to catch up to Pac-Man. One ghost is not enough. But throw in four Ghosts, and things get more interesting… at least initially. With a little maneuvering, the same problem exists. As long as the player can get all four Ghosts to follow in Pac-Man’s wake they will not be a threat.

The monotony of the chorale-and-run-away play strategy is shaken up by the Ghost AI personalities and AI modes. 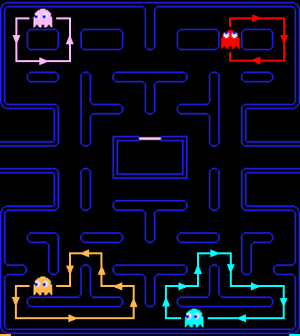 “Ghosts’ movement patterns in the “scatter” phase once they’ve reached their home corner.” Image from the amazaing Pac-Man Dossier by Jamey Pittman

Each Ghost has a personality that determines how it moves through the maze. Yes, in general all the Ghosts appear to just follow Pac-Man around, but if we look closely only the red Ghost, “Blinky”, is completely dedicated to directly hunting Pac-Man. It always tries to close in on  Pac-Man’s exact position. In contrast “Pinky” prefers to move into the space that is a few squares in front of where Pac-Man is facing. What’s interesting is players generally interpret Pinky’s unique AI personality as being non-confrontational and easily spooked. Put Blinky and Pinky in the maze together and they often work together to head Pac-Man off and pin him from both sides.

Ghost AI modes shake things up in a much more obvious way. Ghosts will switch between “chase” and “scatter” modes on a timer. They’ll spend most of their time in “chase” mode and brief periods where they’ll “scatter.” Even if the Ghosts are closing in for the kill, when the timer goes off the Ghosts will ignore Pac-Man and retreat to their respective home corner. So even if a player manages to string the Ghosts along, it will only last as long as the AI mode timer allows. When Pac-Man grabs an energizer Power Pellet the Ghosts switch to a frightened AI mode, in which they will reverse direction and choose random turns as they run away. Between the automatic, timer-based modes (chase, scatter) and the player-activated mode (frightened), the apparent dominant strategy of kiting the Ghosts is minimized in effectiveness and players have to adjust to the constantly changing and partially unpredictable game state.

Here are more nuances and wrinkles to Pac-Man’s design that increase the challenge for players aiming for high scores:

If you take all of these aspects into account, you can see how Pac-Man’s gameplay has enough challenge and complexity for players to spend years enjoying and mastering the game.

With relatively few mechanics, elements, and rules, Pac-Man achieves gameplay that is deep, challenging, and that dynamically changes with each play. Next in this article series, we’ll look at how Pac-Man’s design and gameplay hold up in the Google Doodle and the Google Map versions.