It’s E3 week! Here at Design Oriented we’re skipping the speculation and the hype. We’re focused on bringing you the details from E3 that are design-oriented. Keep an eye on our twitter feed and keep coming back here for features that zoom in on games from the show.

Making an E3 trailer or demo is a complicated. A few short minutes is all companies have to thrill, intrigue, and possibly make good on their promises. Naughty Dog promised there would be more ways to move through the levels of Uncharted 4 and this live stage demo chase scene makes good on that promise.

It starts with a sweeping vista and the destination far off in the distance. 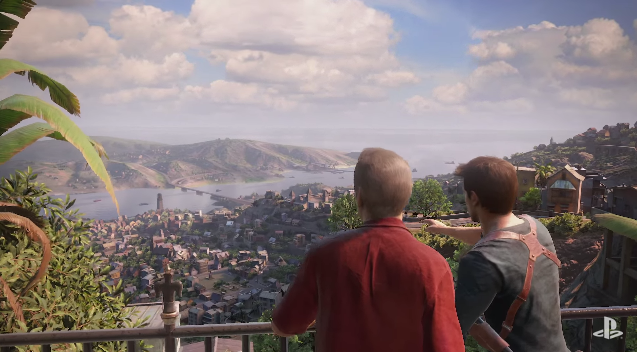 How do Drake and Sully get to the tower below? Sully chimes in “We just keep heading down hill”. While a cinematic ride down roads and back alleys seems like a linear experience, the E3 demo hinted at something more. At every turn when Drake was cut off by the pursuing van, there were always at least two other paths the he could take to evade his foe.

The whole experience is subtly a dynamic set piece. As NeoGaf’s mrklaw notes, the whole scene is a clever use of winding roads that fork and then meet up again later. The interwoven paths funnel Drake and the pursuit van towards each other and down the hill towards the destination no matter which of the many paths they take. 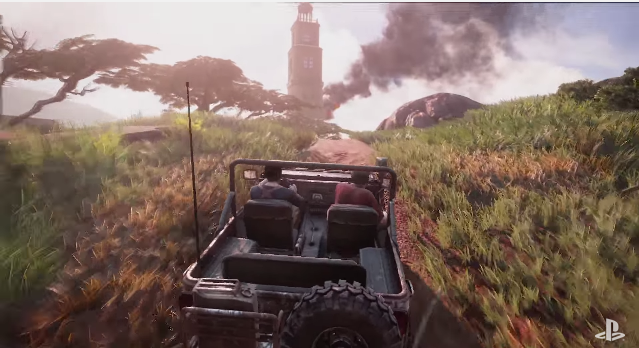 Richard says: I think the biggest difference between this Uncharted 4 chase scene and this one from Uncharted 3 is that there are few to no dead ends. When young Drake takes the wrong jump in Uncharted 3, it’s game over. I couldn’t see any areas where the player car in Uncharted 4 would get stuck at a dead end.

The Uncharted 4 set piece flows pretty nicely. The scene also keeps up the pace by eliminating loading screens. Gameplay-wise, the decisions look just as simple as other Uncharted chase set pieces: Steer left, steer right, and you’ll make it. Contrast Uncharted 4 with this scene from The Adventures of Tintin, and you’ll see what I mean. Tintin features driving, shooting, grabbing, jumping, and punching.